When we visited Sint Maarten for a quick weekend getaway in early April 2017 we pretty much did so on a whim. We both had the weekend off, and since we can fly for free on open seats, we checked flights to see which planes had the most open seats and Sint Maarten ended up being the best option! So we packed for a quick weekend getaway and hopped on the 5 hour flight for literally, a 27-hour vacation. Since we only had such a short time we knew this trip would mostly consist of beaching and eating, so we tried to find a fairly cheap place to stay for the night that would be close to the beach and we ended up discovering the hidden gem that is the Azure Hotel. (To see what we did in Sint Maarten click here)

The Azure Hotel is a quaint, charming little hotel in Simpson Bay, which we found for 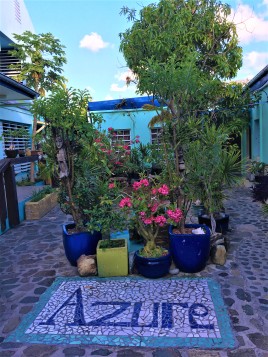 about $75/night, check it out here. Since Simpson Bay itself isn’t really a tourist hotspot like Maho Beach or Orient Beach, the price here was much cheaper than if we had tried to stay at one of the popular beaches. In all honesty though, an island beach is an island beach, and we certainly aren’t picky, especially when we’re going for only one day and trying to spend little to no money 🙂

The Azure is run by a very friendly man named Mike, from NY, and his wife. It has a much more of a “homey” feel as opposed to corporate run hotels, as this is more of a “Mom-and-Pop” type option that you would find on Airbnb (Pro Tip: the rate is even cheaper on Airbnb than it is on Trip Advisor or Expedia). I believe they live in the front half of the hotel, which is separated by this beautiful little courtyard. It does seem pretty small, as it is a one-story hotel, so I would think that rooms probably fill up fast. However, the fact that it’s small is actually really nice because you aren’t fighting for beach space or chairs, and the beach isn’t crowded. While you couldn’t see the ocean from our room, it was only a short walk (literally, like 20 steps) to reach the sand, although I believe they are renovating soon to make all 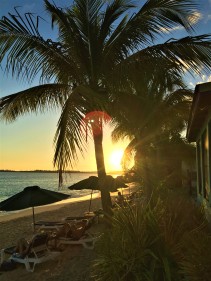 rooms ocean front. The room included a full kitchen, so if you are trying to save money and cook your own meals that is definitely an option! The rooms themselves were very clean and included a King size bed in the bedroom, a foyer area, kitchen with table and chairs, living room area with TV and futon, shower room, bathroom, and an outside porch area. To be honest, it is really more of a small condo than a hotel room! Another plus is that it is only a few miles from the airport on the Dutch side ($10 for a taxi), which was big plus for us since we had very limited time on the island. Being right next to the airport and Maho Beach, you do hear planes a good bit, but they don’t generally start until 8am and they don’t usually fly past 7:00ish, so they don’t fly throughout the night, although if you’re in your room, the sound is pretty blocked out anyway. The room includes a wireless phone as well with the taxi number programmed into it so you can call your own cab if you need one (also a plus if you’re like us and don’t have an international phone plan). Azure also has free wifi that is great in your room and on the beach right outside the hotel, which is super convenient! Check in is generally at 3 and check out is at 11am, however, we were able to get into our room upon arrival at 1:30, and we asked for a late check out since our flight didn’t leave until 4:00 the next day, so Mike graciously allowed us to stay until 2:00 at no additional charge! HUGE plus for us since we literally only had 27 hours on the island and we were trying to make the most of it and fit as much as we could in!
The water in Simpson Bay was clear and warm and overall wonderful! We were there April 1st and it was almost like bathwater, but still refreshing! It is definitely more of a

family friendly beach that is also used by some locals, but is not crowded like the beaches of Maho or Orient. As a head’s up for those with kids – we did see a few topless sunbathers, but that was not the norm as most beachgoers were fully clothed, which is not the norm for some of the other beaches on the island 🙂 Our first day there the water was calm and warm, our second day there were some great waves to play in, so I think the water itself gives you a little variety as well. Azure provides beach towels, lounge chairs, and umbrellas right on the beach for their guests as well, so you really don’t need to leave the hotel. If you’re looking for bars and food there are several along the beach that only require a short walk of a quarter mile or so (we loved Karakters, although it is a little pricey for entrees), or you can go into the town of Simpson Bay and find restaurants, bars, and supermarkets there. Mike and his wife are very friendly and will recommend places to you if you ask! The views are spectacular, as the hotel itself is flourishing with beautiful greens, flowers, and palm trees. They even have coconuts growing on the trees and an outdoor passion fruit canopy. As a bay, Simpson Bay is home to a variety of yachts, catamarans, sailboats, and other vessels that dot the water. Our one day there we could see as many as 40+ boats! We would absolutely recommend Azure Hotel and would definitely return! Plus, it is probably the absolute best bang for your buck if you’re working with a budget! 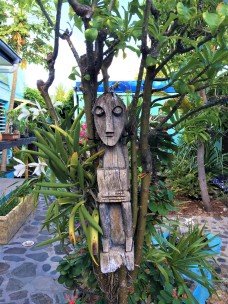 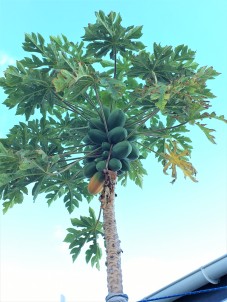 *Disclaimer: all images and opinions are my own, for which I did not receive compensation

One thought on “Sint Maarten – Where to Stay”

Hi! I'm Katie, a 20-something Athletics Marketing Manager who is married to my best friend - my best friend who also happens to be a pilot for American Airlines....