First of all, Greek food is AMAZING! You honestly probably don’t even need to bother reading this post because everything is fabulous and you can’t really go wrong (at least we didn’t). But, if you’re one of those people who like to be prepared and get a taste of what to expect (pun intended), then by all means, keep reading!

*Side Note – this list is NOT in any specific order because I couldn’t make up my mind when I TRIED to order it. So don’t pay attention to the numbers, it’s ALL good!

*Also, all images and opinions are my own, for which I did not receive compensation

1.) Seafood – Since we spent the majority of our time in Greece in the Greek Islands of the Cyclades (Naxos and Santorini), we obviously had our choice of fresh seafood. Often times, whatever is caught that morning is what is on the menu that night. This is where you get to be adventurous….try something new! Like I said earlier, you really can’t go wrong! If nothing else, at LEAST try octopus once during your trip, even if it’s fried calamari. Octopus is caught daily nearby and is strung up in the streets outside of the restaurants to dry throughout the day, it’s actually a pretty cool sight, and one that I umfortunately didn’t get a picture of. Chances are you’ll see LOTS of these, meaning super fresh! Our favorite restaurant in the world is Dimitris, found in Amoudi Bay, Santorini. You’re literally eating right on the turquoise water with little boats dotting the water, and the food is fresh seafood and INCREDIBLE! Check it out here

2.) Saganaki/Tirokroketes – both of these are versions of fried cheese, essentially, the Greek version of American mozzarella sticks, except way better. Often times, it’s local cheese (at least it was in Naxos, Santorini has to import most of it’s products). Saganaki tends to be a more squared version while Tirokroketes are little balls, but that is the biggest difference I could tell between the two (although I’m sure there are more differences I’m just not aware of). These are great as appetizers or snacks! 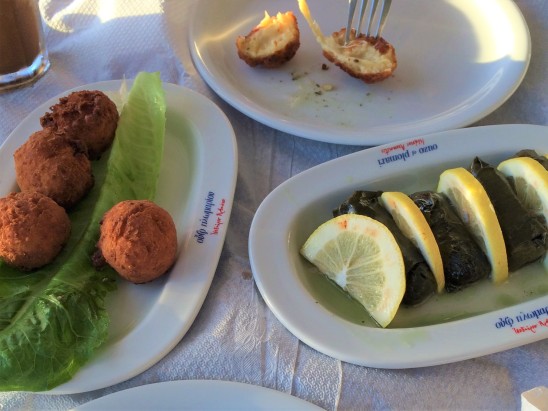 3.) Dolmakadia- these are a traditional Greek specialty: stuffed grape leaves, also called vine leaves. Think the Greek version of Chinese egg rolls or Vietnamese spring rolls. These leaves are stuffed with different types of meat, rice, and herbs, rolled up, and often served with lemons.

4.) Greek Yogurt – because, duh. Obviously you have to try this one. To be honest, I hated Greek yogurt until I went to Greece and had it with every meal. Now it’s one of my favorites for breakfast, snack, or even dessert! Again, it’s often made locally, and is way better than anything you can find in any American store. It is typically either served with fruit, or with either honey or some kind of marmalade. We were served yogurt with orange marmalade as a complimentary dessert at our first meal and we were sold! It became our daily breakfast and our go-to midday snack/lunch when we were on the road travelling the countryside. Even if you think you’re not a fan, TRY IT! It’s completely different in Greece and sooo good! You’ll thank me later 🙂 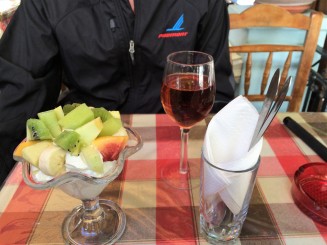 5.) Tzatziki – this is a dip made from Greek yogurt, cucumbers, oil, dill, and other herbs. It is delicious and is often served as a dip for veggies, slathered on a gyro, or served with meat.

just about every street corner, and they are SO CHEAP! We got these in Naxos Town for lunch for $2 each. Of course, these come a variety of ways, but these ones were traditional and included lettuce, onion, tomato, cheese, Greek tzatziki sauce, french fries, and of course, meat, all rolled up into a pita flatbread. Meat options typically include chicken, pork, or lamb, which are roasted vertically rotisserie-style. Upon ordering, your meat is shaved fresh off the turning spit and placed in the pita in thin strips. Literally, one of the best things we ate the entire trip!

7.) Greek Cafe Frappe  – this is a popular Greek coffee drink that is served cold on ice.

Essentially a creamy frothy ice coffee topped with Greek foam. Servers will often ask if you like it “sweet”, “medium”, or “plain”….neither of us use much creamer and often drink coffee black, but being that we were unfamiliar with how bitter a Greek black coffee would be we went with “medium”. And it was HEAVENLY! We discovered this liquid gold halfway through our trip and you can bet that we made it a daily occurrence from there on out! Seriously, try it!

8.) Moussaka – we tried this our final night in Greece, and our only night in Athens. We actually went out on a limb on this one and asked the waiter what he recommended. He recommended moussaka and told us he was so sure we’d love it that he’d give us a new meal for free if we didn’t like it. Needless to say, we did NOT have to take him up on the offer. Moussaka is almost like a Greek lasagna with layers of meat and eggplant, mixed with tomato sauce, topped with a white sauce and baked. It’s typically served in it’s own little soup bowl dish and is a delicious warm comfort food!

9.) Wine – Greeks love wine and offer it for every dinner, which we happily obliged. We stuck to local and house wines to a.) taste Greece, and b.) stay under budget…we were not disappointed. 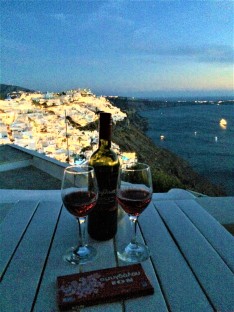 “Wine bushes” as my husband calls them, can be found often dotting the countryside of Naxos, and Santorini has several wineries, so you can get local wines on both islands. To be fair, neither my husband nor I are wine connoisseurs and to be honest, neither of us know much about wine, but all the wine we had tasted fabulous! Because Naxos was so inexpensive, we got wine with dinner but Santorini is much pricier. In Santorini we got a bottle or two of wine from a store in Fira for under $10 and sat out on our balcony overlooking the caldera both nights and watched the view with our Greek wine and Greek chocolate…perfect endings to perfect days.

10.) Sweets – Both Naxos and Santorini have a main city hub that includes lots of little restaurants, shops, and businesses. In Naxos it was Naxos Town, or Chora. In Santorini it’s Oia or Fira. Both locations offer a variety of options for those with a sweet tooth, including ice cream, waffles, crepes, and other, more traditional, Greek sweets. Again, you can’t really go wrong with this one….especially if it has Nutella!

Hi! I'm Katie, a 20-something Athletics Marketing Manager who is married to my best friend - my best friend who also happens to be a pilot for American Airlines....